MENU
View cart “Bicentennial Commemorative Bag” has been added to your cart. 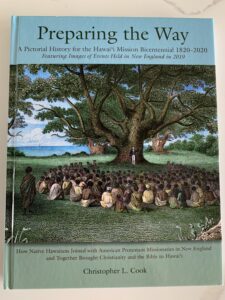 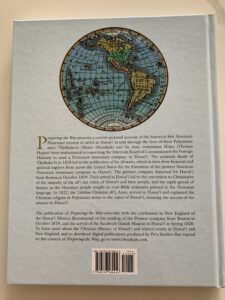 Featuring Images of Events Held in New England in 2019

Christopher “Chris” Cook, author of the The Providential Life & Heritage of Henry Obookiah, a ground-breaking, modern-day biography of the legendary first Native Hawaiian Christian. In Preparing the Way the author’s indepth research and collection of previously unpublished photographs and illustrations, tells the true story of this mission to Hawai‘i made infamous by novelist James Michener in his fictious best-seller Hawaii.

How Native Hawaiians Joined with American Protestant Missionaries in New England and Together Brought Christianity and the Bible to Hawai’i.

Preparing the Way presents a concise pictorial account of the historical first American Protestant Mission to arrive in Hawai’i as told through the lives of three Polynesian men: ʻŌpūkahaʻia (Henry Obookiah) and his close companion Hopu (Thomas Hopoo) were instrumental in requesting the American Board of Commissioners for Foreign Missions to send a Protestant missionary company to Hawai’i. he untimely death of ‘Ōpūkaha‘ia in 1818 led to the publication of his Memoirs, which in turn drew financial and spiritual support from across the United States for the formation of the pioneer mission company. The pioneer company departed for Hawai‘i from Boston in October 1819. Their arrival in Hawai‘i led to the conversion to Christianity of the majority of the ali‘i nui rulers of Hawai‘i and their people, and the rapid spread of literacy as the Hawaiian people sought to read Bible scriptures printed in the Hawaiian language. In 1822. the Tahitian Christian Aliʻi, Auna, arrived in Hawai’i and explained the Christian religion in Polynesian terms to the rulers of Hawai’i , ensuring the success of the mission to Hawai’i.

The publication of Preparing the Way coincides with the celebration in New England of the Hawai’i Mission Bicentennial of the sending of the Pioneer company from Boston in October 1819, and the arrival of the Sandwich Islands Mission in Hawai’i in Spring 1820.

Be the first to review “Preparing the Way by Christopher L. Cook” Cancel reply